Claire Wardle: Massive problems are tackled with a minimal budget

Dr Claire Wardle, the author of the seminal framework depicting information disorder, addressed its new features post 24/2 in the first FaktaBaari Forum which was organized by Faktabaari, Sitra and NORDIS on 24 May.

The Forum highlighted the shortcomings in the preparation of democracies for information influence. Privacy, regulation of the power of digital companies and information literacy are vital for the future.

The dangers of disinformation have been discussed for years, but democracies’ responses to the problem remain fragmented. When Russia invaded Ukraine on 24 February, it was able to spread its propaganda on several social media services where media monitoring is limited. We know what Russian leaders say, but little about the kinds of informational manipulation directed at various network users.

“I was really frustrated in the first days of the war when I realised how unprepared we were for the situation,” said Claire Wardle. Digital platforms did not know what to do with the content produced by the two parties to the war. Fact-checkers in different countries had no common databases and no idea what their colleagues in different countries were doing. Universities did not have the capacity to collect research data from social media services.

“We didn’t have the necessary capacity, even though it’s 2022,” Wardle described.

On the state of play of the infomation war Dr Wardle rreferred to the Atlantic article by Carl Miller summarizing the situation “The fact that Western analysts don’t see information warfare doesn’t mean it isn’t happening, and it doesn’t mean the West has won.” The Russian disinformation is spreading effectively outside the west and we should not forget that.

The operation of digital platforms is still non-transparent,” Mrs Wardle stressed in her speech. Social media services mark claims as controversial based on fact-checking, but we do not know the impact on the spread of disinformation because researchers do not have access to the platforms’ data. “Therefore, independent bodies would be needed to monitor the decision-making of platforms,” she stressed.

The impact of platform self-regulation is at least seen in the shift, particularly in the US, of some radical right-wing users to platforms that emphasise unlimited freedom of expression at the expense of rules. These include Rumble, Parler, MeWe, BitChute, Truth Social and Gab.

Claire Wardle’s influence on fact-checking and disinformation research is immense. In 2017, she co-authored a report with Hossein Derkhshan for the Council of Europe that defined key concepts in the field, such as disinformation, misinformation and malinformation, which fact-checkers, researchers and public authorities are now operating with. The background was the frustration with the debate on “fake news”, which Donald Trump harnessed for his own purposes during the 2016 presidential election. 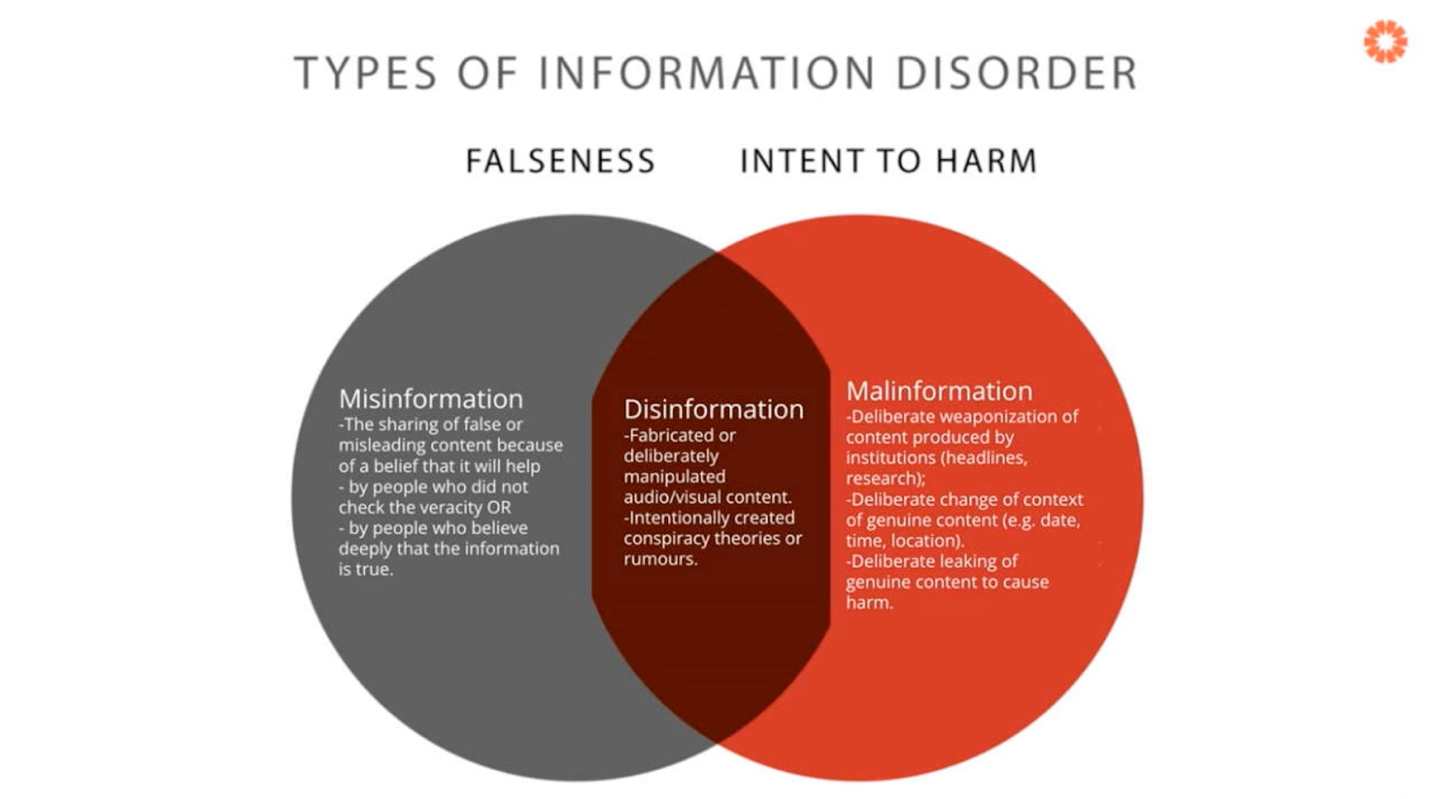 Updated types of information disorders’ as presented by Dr Wardle

The report published five years ago, made a number of recommendations to governments, digital platforms and the media to tackle disinformation. Now the Russian attack has underlined just how seriously the work is not yet finished. The EDMO network, which brings together European fact-checkers, receives funding from the European Commission, but it is minimal compared to the scale of the problems.

“We have no resources compared to the digital platforms. We need a new institution with access to the latest technology, the ability to experiment and develop new ways of working in an agile way, but also the ability to influence regulation and the development of digital information literacy. Funding should be substantial. “

However, in five years, understanding of information disorders has advanced by leaps and bounds. Wardle stresses that we should not just focus on “content atoms”, individual misstatements, although it is important to correct them, but look at the media ecosystem as a whole. People are influenced by wider narratives. For example, in the US, cable channels such as MSNBC, CNN and Fox News were feeding Trump’s misleading claims of election fraud during the 2020 presidential election by giving them a combined total of over 30 hours of programming. For full context read here.

The best way to combat misinformation is to “vaccinate” people against it in advance. Then misleading claims will have their wings clipped without even needing to be mentioned.

“We can teach you how to identify different techniques of influence: how to deny the truth, how to cherry pick only certain information, how to influence with statistics or what are logical fallacies. That’s when people notice when they are being manipulated,” said Wardle.

Fact-checkers call this method prebunking. A current example of the method is the intelligence shared by the US before the Russian invasion. The US warned of Russian disinformation alongside the attack and thus probably succeeded in diluting the Russian information operation.

The teaching of digital information literacy, which Faktabaari EDU develops as part of its EDMO NORDIS network, is based on the same idea of ​​prebunking.

Sitra’s Tiina Härkönen and Jukka Vahti presented a digipower investigation, which reveals how data collected from users can be used to influence decision making.

Mikko Salo, chairman of the event and host of the FaktaBaari, had asked each speaker for three pieces of advice as we strive as individuals for a more authentic information environment during the information war. At the end of the blog you will find summaries from Dr Wardle, Kari Kivinen of Faktabaari EDU and Sitra’s Digipower project to support you.

At the event, Sitra also announced continued support for Faktabaari to maintain Finnish fact-checking expertise while a more permanent solution is explored. The focus of Faktabaari and Sitra was set for the Digital Information Literacy as a Citizen’s Skill event with stakeholders on 15 September.

Follow @FactBar twitter to make sure you are among the first to hear about this event and it’s follow-up with NORDIS.

The whole event can be watched as a recording here. 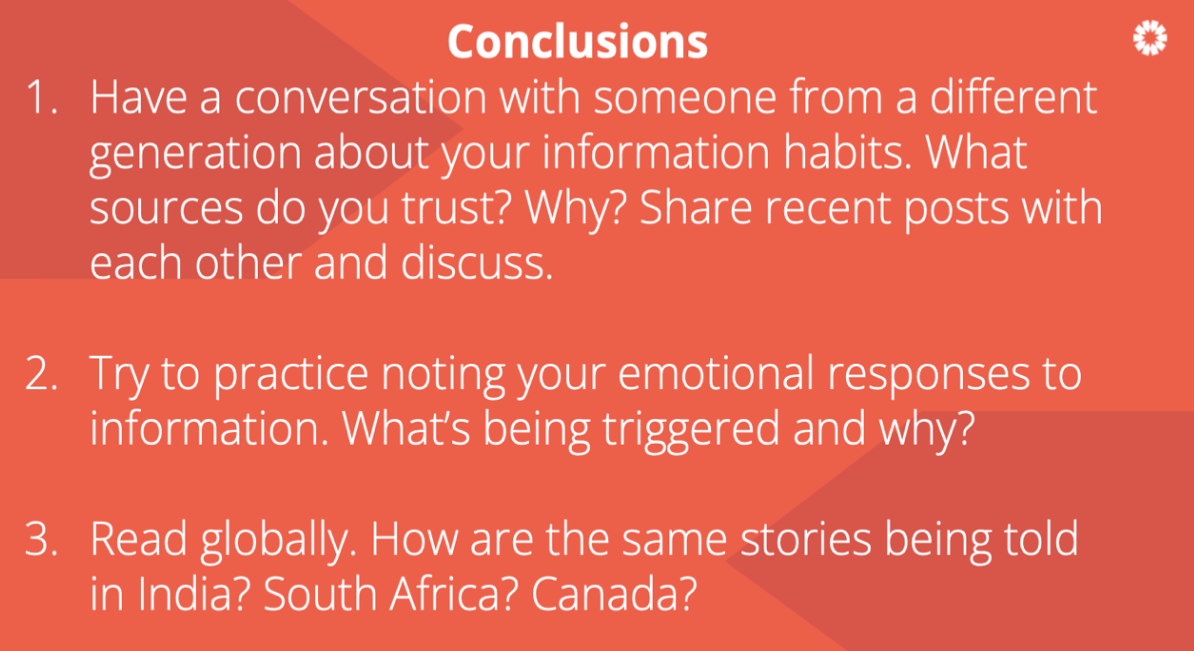 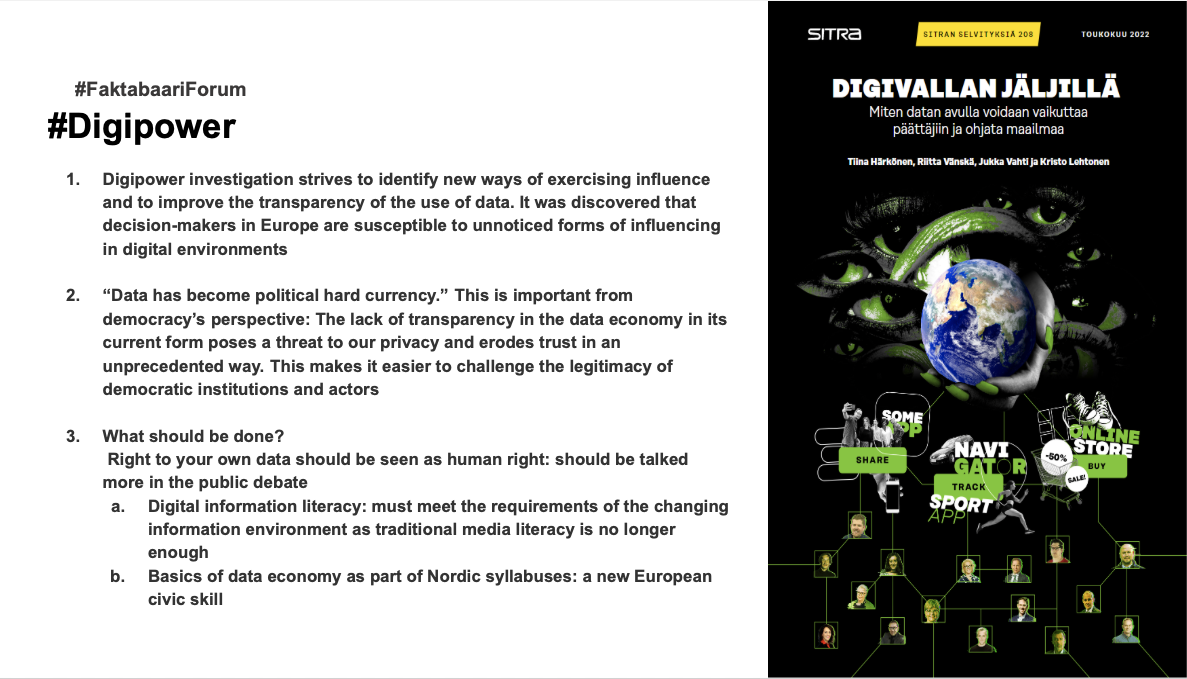 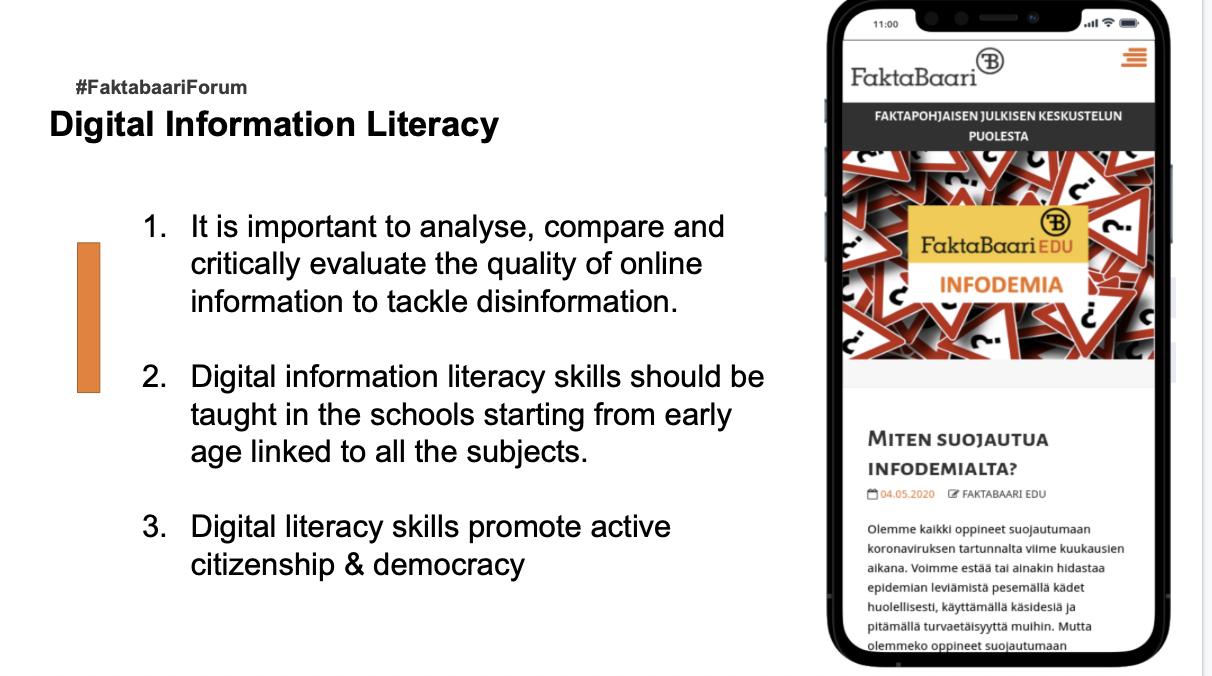